From year 711 to 1492, Andalucia, will be an Arab society, with alternative phases of military and cultural dominion very differentiated.

From the 711 to the 755 a period of inestability was lived in the region that ended with the arrival of Emir Abd- – to Rahman I “Emigrado”(756-788). He ordered to construct a tower watch in the Chanca, on the present port of Almeria, and caught the support of the Banú Hasán, tribe of Yemenis: the old visigótic Urci becomes Urs-al Yaman now, “Urci of the Yemenis”, with capital in Pechina, to the north of Almeria.
Abderramán II (822-852) amplió el puerto con la construcción de una arsenal, y en la llamada “guerra de la Hoja de la Parra”, conflicto nacido en Lorca entre árabes del Norte y Tribus Yemeníes, desterro a estos últimos que se instalaron con sus hermanos de Pechina.
Abderramán II (822-852) extended the port with the construction of an arsenal, and in the so- called “war of the Leaf of the Parra”, a conflict born in Lorca between Arabs of the North and Yemeni Tribes, exiling these last ones, who settled with his brothers of Pechina.
Between the years 840 and 861, the constant Normandos attacks animated Emir Omeya to construct defensive strengths in the coast. The first and most famous one was located in Qabit Bani Aswad (Cabo de Gata), probably in the Fabriquilla (850). This ribat (strength of mystical life and single-breasted uniform jacket), nowadays disappeared, was the first Islamic communal construction of importance in the region of Níjar. Next to ribat of the Chanca, it served to strengthen the blossoming of the province. Its defense trusted to the family of the Banú Sirach (“the children of the chair-maker”, known later like the Abencerrajes, who shared with Jews, muladíes (conversos to the Islam) and mozárabes the control of the valley of Pechina.
At the end of the government of Muhamhad (852-886),takes place the arrival (884) of “the Sailors” (bahriyyum), mozárabes and Spanish muladíes that had fled from Cartagena, in the Cora de Tudmir (Murcia). Once passed the initial conflicts of coexistence, both groups agreed to the birth of the marine and commercial Republic of Pechina (891), independent of the Cora de Elvira (Granada) and hermanada with Tunisia and the Magreb for the control of the Sea of Alborán. The activity in the anchorage of the Chanca centralized, dealing itself with slaves, agricultural crafts, products and weaves; at the flourishing time of the Silk. The Arabs of Elvira attacked Pechina , requesting protection to Cordova in exchange of vasallaje.
Emir Abd-Alláh (888-912) acceded to incorporate to Pechina the central government Omeya, being created the Cora (administrative district) of Bayyana. Marchena was fortified and the Chanca around Al-Mariyat (translated by like “tower a watch”) and by others like” The one of the mirror sea “and all the zone from Alhama to Níjar by the coast and to the North to Purchena, creating a total of twenty seats fortified, issuing here and now the order of foundation of Níjar on the ruins of a remote past. 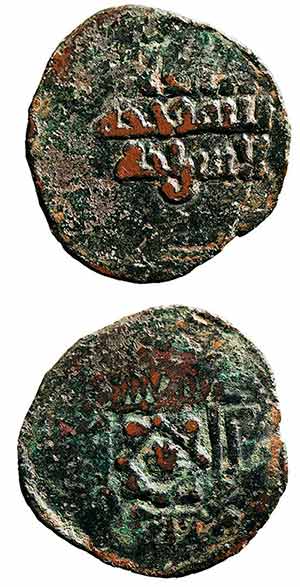 Currency minted during the reign of Ab-Alláh