The technology of s. XIX and XX made possible new methods of extraction, manipulation and transport of minerals. The mines returned to render. Railroads, cables, descargaderos, towns, aqueducts, lights and highways were constructed.

A prosperity appearance returned to the mountain ranges of the Cabo de Gata, the population increased to 14,000 inhabitants (1900). It is the time of the lead quarries, when transporting cables went from the riscos of the Colativí and Huebro to Cabo de Gata, and the railroad of Lucainena took mineral to the Bitter descargadero of Water. It lasted until 1930, when the phase of gold in Rodalquilar begins. When beginning the operation the neighbors reached the thousand, when finalizing, in years 60, the town was left. Today, like the operations of Alhamilla Mountain range, are only quiet witnesses of the past. Rodalquilar offers the own elements of the operation of a gold deposit: town of workers, with church and houses of colonial flavor, school, quarter, warehouses, building of washing, ground and pulverization, large stone benches for cyaniding, cubas cylindrical of precipitation, great reinforced concrete structures dyeing in reddish tones by effect of oxide and a rock landscape washed in form of small tubes. It is a unit of unusual industrial archaeology of and suggestive beauty. The history of the region of Níjar, from 1970, still is in phase of crystallization. 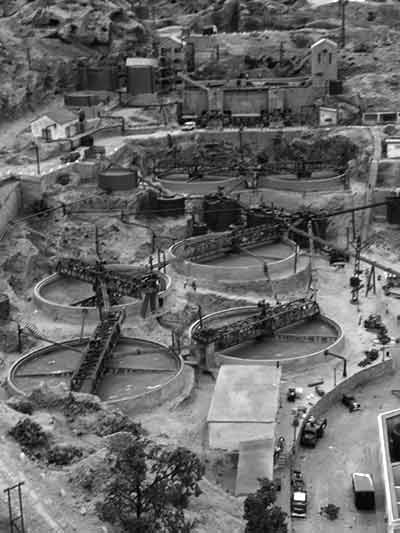