In 912, Emir Abderramán III raised the throne, to the Nasir “the Protector”, who will proclaim Caliph in the 929 and will reign until the 961.

Decided to finish with the instability of Al-Andalus, inagura a splendor stage that will last a century almost.
Of his reign it interests to stand out that in the 915, the Republic of Pechina is put under the central power of the new Caliph totally, accepting to a Cordovan cadí like governor of the cora. The system of towers consolidates and fortresses (Arab foundation of Níjar) to face the threat of the fatimíes, that, after long years of hostilities, attacked Almeria in the 955. These hostile incursions animated to the caliph to fortify the Medina de Almariya, causing the foundation of capital Almeria and the beginning of the decay of Pechina.
They followed years alternative of crisis and splendor, kingdoms of Taifas (1010-1091) with Jayrán, governor of Almanzor, Zuhayr Almotacín (1037-1091), almorávides (1091-1147), Alfonso I SAW and VII, with prioritize Christian conquest (1147-1157) and it reconquers almohade (1157-1238). Of all it as soon as we can mention as genuinely nijareños episodes the disembarkation of the genoveses in 1147, in the beach that today takes its name, when Alfonso VII, to the control of a Christian confederada fleet, was decided to finish with the uncontrolled pirateo that made the republic of Pechina in the sea of the Alborán.
Also Níjar in 1169 had to succumb, when falling Almeria into the hands of Ibn Mardanis “the king wolf”, ally of Alfonso VII. In 1225 Ibn Hud of Murcia it is raised against almohades of Almeria and in 1228 it conquers Níjar, with another possible destruction of the strength. Since then until 1488, the Nazarí kingdom of Granada settles, during which the castles of Huebro, Inox and Tartal, the towers watch of the coast and the fort of Rodalquilar are based. Of this time we have the news on Al-Hawan, Bitter Water, like stable slums (1348), and of the anchorage of Chávala (San Pedro).
Not we return to know of Níjar even when tahal, that also included Turrillas and Lucainena, in the summer of 1488 capitulates his before the troops of Kings Cato’licos. It must date from this moment the adoption of San Sebastián as pattern of Níjar and to him devoted a hermitage today disappear, that was raised at the beginning of the hill of the present street of the Race. It fell Almeria in 1489 and Granada in 1492, finalizing eight centuries of Arab culture. With s. XVI the Morisco period begins. 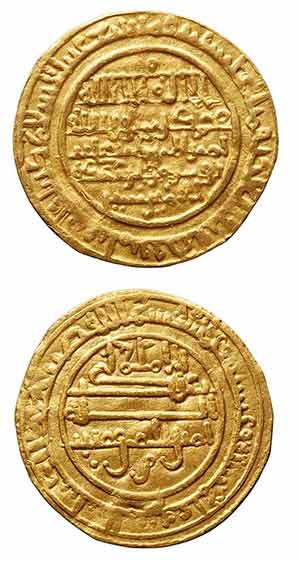 Currency minted during the Umayyad Caliphate