Framed in the Murcia-Almeria biogeographic unit, the region of Níjar presents climatic peculiarities (sub-arid with high average humidity and high evaporation and solar exposure) and edaphological with soils and volcanic relief of low fixation, which condition the presence of a weak vegetation capable of take advantage of the rainfall (climatophile) and edaphic vegetation (which does not depend on rain, adapting to the soil or hidden rainfall to survive) of great variety and richness.

It is a floor of thermal Mediterranean vegetation that represents here one of the most peculiar floristic units of the Peninsula with numerous curiosities, such as the palm (Chamaerops humilis), the only native palm of the continent, the lentisk, the arches and jujubes (Ziziphus lotus), prodigious adaptation to the environment. We will make a clear distinction in 4 biotopes

Arid zone:
Volcanic sands and coastal cliff, dunes, sand and salt. In the area of influence of the waves live some specialized lichens and small algae. They are vertical wall cliffs where we find some vegetable redoubt in cavities and landings. It is cormophytic vegetation adapted to support salinity, such as sea fennel (Crithmum maritimum) and saladines, (Lycium intricatum). 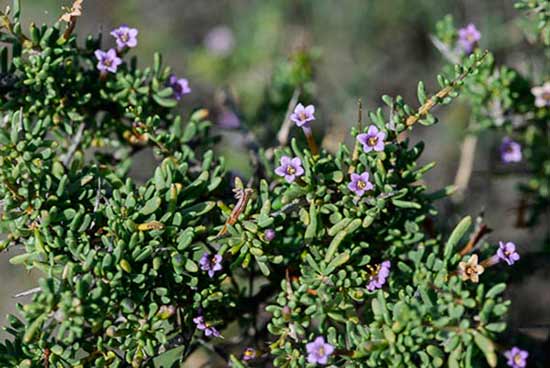 On the beaches, where organic remains can reach with the waves, we find the sea caterpillar (Cakile maritime). The embryonic dunes of the coast, house a scarce and very poor vegetation in grasses, among which dominates the composite Algodonosa (Otanthus Maritimus) and the Elymus Factus.

In the guiente inner band, that of the movable dunes, we can see grasses like the Barrón (Ammophila arenaira arundinacea). Even further away from the water, the semi-fixed dunes, with the presence of camephytic species, such as the Bolina or Pegamoscas (Ononis natrix ramosma).

In the fixed dunes, we find Taixars of Tomarix boveana and halophilic species such as Limonium delicatum, and where there is greater humidity, the large almajos (soda scorpion) such as the Sarcocomia fruticosa that in this band we can find in the most persistent brackish ponds. 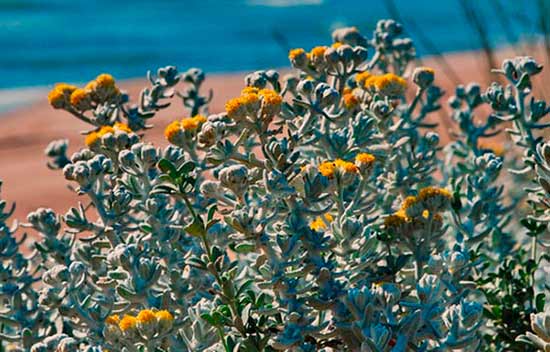 The grassland
Also called "barronal" and "low scrubland", among which stands the jujube dome, microworld under which numerous plant and animal species are hidden, are here by the sea. Finally, in the upper area of the cliffs and on the volcanic slopes, we have the “comical”, the “retamales” and some “lentisco” witness to an earlier abundance.

Palm groves and blackthorn alternate with thyme, ephedra, bufalagas, flycatcher, oroval, etc. completing with its marked noteafricano character a unique landscape in Europe. It is here that the majority of edaphic vegetation species with unique varieties in the world (Teucrium charidemi, Antirrhinum charidemi) develop and where we find the aquatic birdlife, mainly centered in the Las Marinas - Amoladeras reserve area and the old lagoon that forms Today the salt mines of Cabo de Gata. 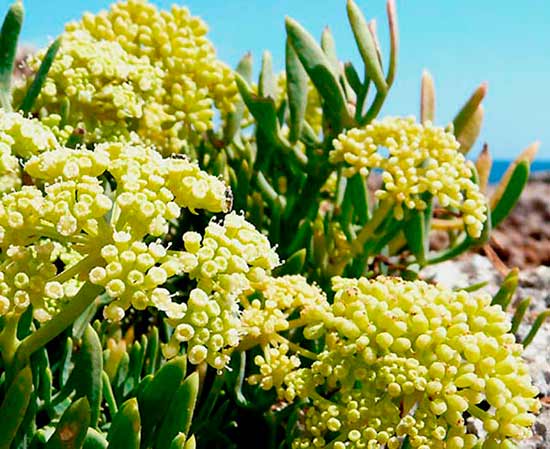 crithmum maritimum
Steppe zone
The thicket and the low prickly forest (Las Ramblas, La Serrata and the hills and ravines of hillside). The spartal, gorse and thyme make up the vast expanses of degradation scrub (vegetation adapted to human presence) that, from the felling and burning of the weak pre-existing wooded base (high woody scrub), dominates the slopes and hills of virtually the entire region. In spite of its undoubted botanical interest, it configures the most bland landscape area, enlivened by small oas of palm trees, prickly pears and pitas or agaves of high pitaco, together with isolated witnesses of old olive groves, almond and fig trees. 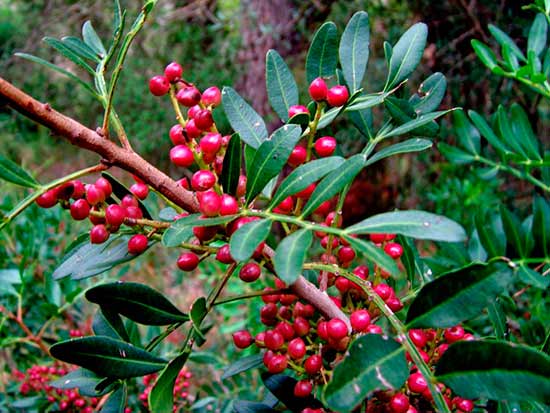 Pistacia lentiscus
The water of the springs, the shadow of the cliffs and the agricultural work have favored the appearance of the largest “green oasis” of the region, where we can find examples of elm, carob, chestnut, walnut, eucalyptus, pines, cattle, olive trees, fig trees, palm trees and of course, a wide variety of fruit trees and irrigated trees among which the orange tree dominates. The orchards and terraces in Monte Alto maintain testimony of crops and rainfed woodland that alternated with native species. Here too, the terraces are often lined and held with prickly pears and pitas. Next to the irrigation ditches and the ravines is the reed, the cane and a host of flowers, fragrant plants, robust and climbers. The height and the greater humidity, as well as the difference in temperature towards lower values, lead to a slight decrease in the invertebrate fauna, more evident in areas of intensive cultivation and due to agricultural spraying, being in general the same already described. 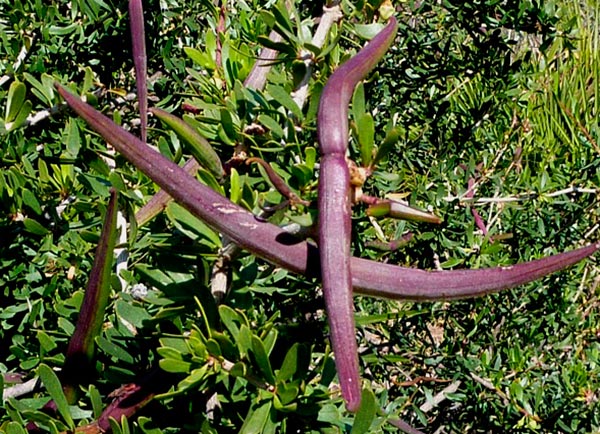